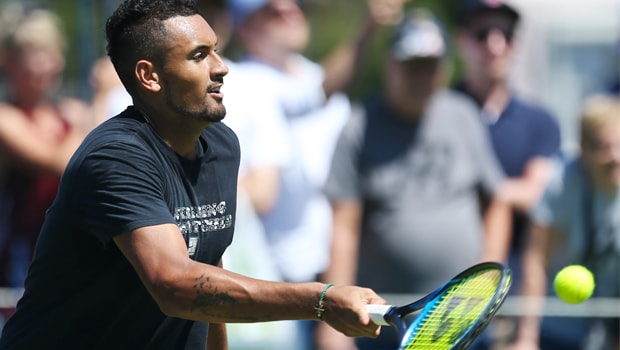 Nick Kyrgios is hoping to make a quick comeback after an injury ruled him out of competing in the Citi Open in Washington DC.

The Australian was installed as the fifth seed at the event and had been due to play compatriot James Duckworth in the second round but pulled out because of a hip injury.

However, he is confident that he will recover in time for the Rogers Cup in Toronto with Kyrgios also due to play Cincinnati in the lead-up to the US Open at the end of August.

The world number 17 said: “It’s the same left hip injury I got after a sudden movement in Atlanta last week and I haven’t had enough time to be ready to play this week.

“The physio recommended a couple of days of rest, rehab and treatment. I’ve got ample time for it to settle down before Toronto.

“It’s disappointing. I’m sure I’ll be here again with another chance to play, but at this stage I can’t risk aggravating the injury with [ATP World Tour] Masters 1000s and the US Open coming up.

“Last year I wasn’t healthy at the US Open, so I want to be right for that.”

Alexander Zverev is the top seed in Washington but second seed John Isner is now out.

The American, who won the Atlanta Open last week, was knocked out in straight sets by Noah Rubin.

Zverev is 3.25 to win the Washington tournament with Andy Murray 3.80.

The Scot, still working his way back to full fitness, is 12.00 to win the US Open, the final Grand Slam of 2018 with defending champion Rafael Nadal 5.50 and Novak Djokovic 3.75.