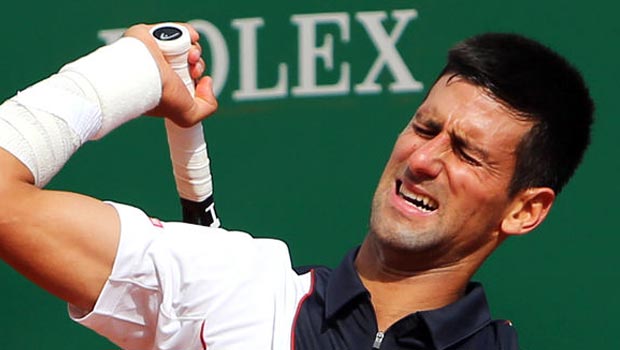 Novak Djokovic saw his excellent run in Masters tournaments come to an end on Saturday but more worryingly, the Serb picked up an injury which will at the very least hamper his preparations for the French Open.

There does of course remain the possibility that he could be ruled out of the year’s second Grand Slam due to a wrist injury, which is particularly bad timing considering Rafael Nadal’s admission of a lack of confidence and recent fallibility on clay, highlighted by his straight-sets defeat to compatriot David Ferrer at the Monte Carlo Masters.

However, Djokovic was unable to capitalise on Nadal’s disappointment as he crashed to a straight-sets defeat to Roger Federer in the semi-finals, losing 7-5 6-2 on Saturday.

The defeat not only ended Djokovic’s defence of his Monte Carlo title but brought his Masters’ success to a close on four, having won in Shanghai, Paris, Indian Wells and Miami.

The world number two though is more concerned with the wrist problem that will now force him off the court for the foreseeable future.

“I just rest now,” said Djokovic. “I cannot play tennis for some time. How long, I don’t know.

“The good thing is I don’t need to have a surgery. I don’t have any rupture or something like that.

“I’m going to go see doctors tonight and then tomorrow again have another MRI, to see if anything changed in the seven days since I had the last one.

Djokovic is scheduled to play at the Madrid Masters, which gets underway on May 5, as well as the Italian Open the week after before the French Open on May 26.

Djokovic has yet to triumph at Roland Garros but did push Nadal all the way in the semi-finals last year, eventually bowing out in five sets.