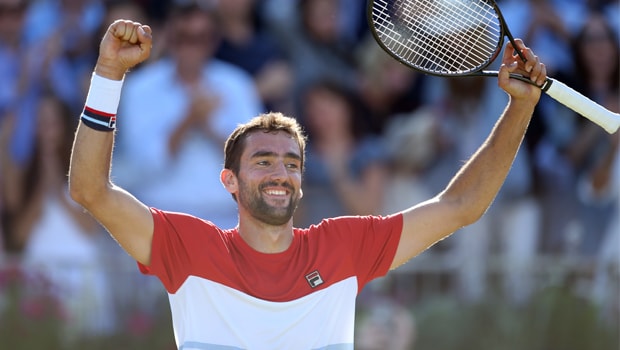 Marin Cilic believes he is playing “great” tennis but he has dismissed talk that he should be regarded as the favourite to win Wimbledon next month.

The big-hitting Croatian underlined his grass-court credentials by winning a second title at Queen’s Club on Sunday, as he battled back from a set down to beat Novak Djokovic 5-7 7-6 (7-4) 6-3 and claim the Fever-Tree Championships.

The 29-year-old, who also had to save a match point during the second set and was 4-1 down in the subsequent tie break, has now been tipped by many to claim a first Wimbledon title this year, particularly after Roger Federer lost in the final of the Halle Open on Sunday to Borna Coric.

Cilic’s previous best showing at SW19 came when he reached the final last year and he confirmed he is feeling on top form heading into the tournament, but he has also played down his chances of claiming a second Grand Slam title following his maiden triumph at the US Open in 2014.

“I don’t know. I’m not looking at it like that. I’m not obsessed by it,” Cilic said.

“I feel that I’m playing great. That’s what I need to do, you know, have a few days of rest and practice and just do things well on my own part of the court.

“I played great tennis, managed to win, managed to find a way to win, and feeling definitely very strong for coming weeks.”

Cilic, who has reached at least the quarter-final stage of Wimbledon in each of the last four years, is priced at 7.00 to claim overall glory at the All England Club this time around.