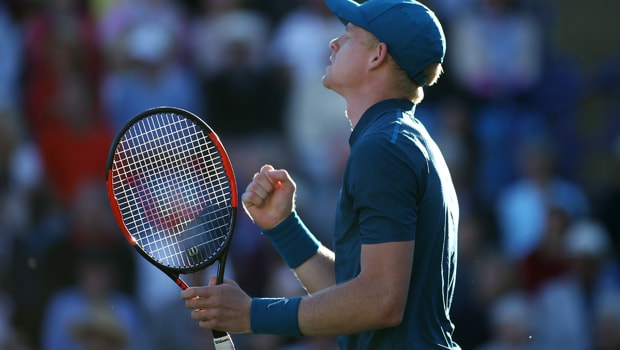 Kyle Edmund is the only British player to have made it through to the third round of Wimbledon after he beat Bradley Klahn on Thursday.

It is the first time the British number one has made it through to the last 32 at SW19 and he made light work of American qualifier Klahn, prevailing 6-4 7-6 (7-0) 6-2 on Centre Court.

Next up for the 23-year-old is the daunting prospect of facing the former world number one and three-time Wimbledon champion, Novak Djokovic, in the third round, but he was not worrying about that match-up following his maiden victory on Centre Court.

“I’m really happy to get the win, it was the second time I’ve played on Centre Court and the first time I’ve won,” Edmund told BBC Sport.

“Growing up as a kid I’ve always dreamed of playing here and to win is great.”

Djokovic booked his place in round three with a comfortable 6-1 6-2 6-3 victory over Argentine Horacio Zeballos, but the Serbian, who has had his fair share of injury problems over the last 12 months, did need to receive treatment on his left knee late in third set, although he is confident it is nothing too serious.

“It’s most likely a twitch, you know, in the muscle or something like this that has affected the knee a little bit,” Djokovic said.

“Hopefully it’s nothing that will concern me, [and] that I’ll be able to perform.”

Edmund and Djokovic have met four times in the past, with the Serb prevailing on three of those occasions, although the most recent meeting at this year’s Madrid Masters ended in a three-set victory for Edmund.

The Brit is priced at 4.00 to win Saturday’s third round clash, while Djokovic is available at 1.20.