It was a great fight: Novak Djokovic after second-round win at Paris Masters 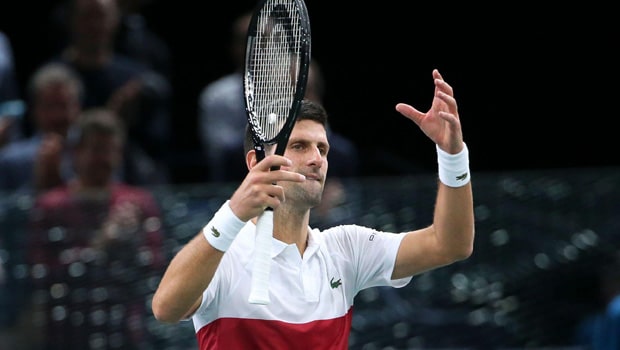 The World no.1 Novak Djokovic made a winning return to the game as he defeated Marton Fucsovics in three sets by 6-2, 4-6, 6-3 in the second round of Paris Masters. Thus, the Serbian won his first competitive match since the US Open final against Daniil Medvedev.

Djokovic admitted that it was great to be back on the court after almost two months. The talisman added that he wasn’t expecting it to be an easy match and he knew that he will have his work cut against the Hungarian.

“It was great to be back on the court after almost two months without competition,” Djokovic said. “I did not expect anything but I knew this was not going to be an easy match. Marton is a very talented player, he has a lot of quality. “It was a great fight. I couldn’t break his serve, he was playing with a lot of precision and we pushed each other to the limit. It was a great opening match for me. I am very pleased.”

In fact, World no. 40 gave a solid competition to Djokovic and also won the second set by 6-4. However, Djokovic bounced back in style and showed his class despite a long hiatus.

“It is just about spending time on the court, finding that match play intensity and playing more points,” Djokovic added. “The more matches I play, I think I am going to get better. I know myself well, I was in this situation before, quite a lot of times, so hopefully, the experience can play a role in doing the job well.”

Djokovic will be delighted to get the win under his bag after returning back to action. The Serbian was able to hit the ground running and will look to go all the way in Paris Masters.

Djokovic will either face Gael Monfils or Adrian Mannarino in the third round of the tournament.