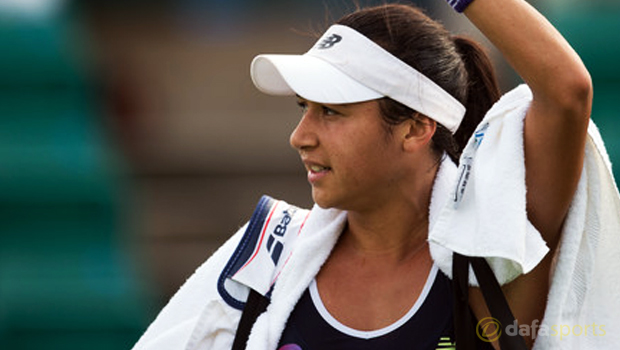 Heather Watson says there are still positives to be taken from her first-round exit in Nottingham but concedes more preparation will be needed ahead of Wimbledon.

Watson was beaten 4-6 6-0 6-4 by Magdalena Rybarikova on Tuesday at the Aegon Open as she got her grass-court season off to a disappointing start.

The British number two, who won the Monterrey Open in March, struggled after taking the opening set and an issue picked up at the recent French Open played a big part in her performance.

She suffered an abdomen tear at the second Grand Slam of the season and this meant she had little time to practice before taking part in the event in Nottingham.

However, despite suffering an early exit, the 24-year-old was feeling positive after the loss and feels more time practising on grass will put her in good stead ahead of the tournament at the All England Club. “I was actually pleased with the way I served,”

she said. “I thought that was one of the best parts of the game and I am pleased that I didn’t feel my abdomen at all because I wasn’t even sure if I would be able to play.

“So I was pleased with that but I definitely need a lot more practice on the grass.”

Watson made it to the third round at Wimbledon last year before being knocked out by eventual competition winner and world number one Serena Williams.

The Brit, who is 151.00 to lift the trophy at SW19, produced a gritty and determined performance to push the American all the way as she almost caused an upset.

Williams is the 2.50 favourite to defend her title while French Open champion Garbine Muguruza is priced at 6.50 to record back-to-back Slam wins.