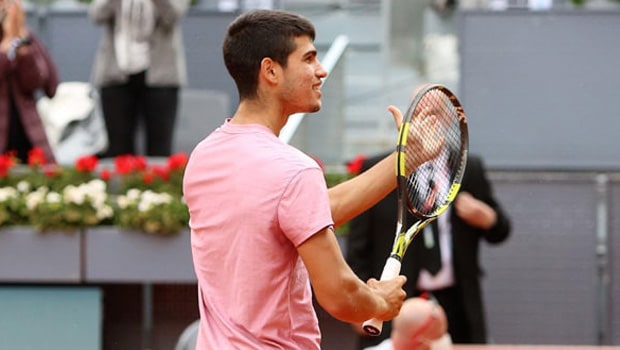 Defending Roland Garros champion Novak Djokovic has rated Carlos Alcaraz as one of the main favorites for the upcoming Grand slam. Alcaraz has been in red-hot form and many Tennis experts expect him to clinch his first Major title soon. The Spaniard recently won the Miami Open and became the youngest to clinch the trophy.

Subsequently, the 19-year-old continued his good form as he won Mutua Madrid Open by beating World no. 3 Alexander Zverev in the final. En route to the final, the young sensation also bested his idol, Rafael Nadal, in three sets in the quarterfinals and Novak Djokovic in the semifinal. In fact, Alcaraz also admitted he is ready to win his first Major title.

Alcaraz has withdrawn from the Italian Open to be fully ready for the Roland Garros and he is going to enter Paris as a red-hot favorite. The youngster has hogged the limelight in the recent past and he is currently at the number six position in the ATP rankings.

In a recent interview, Djokovic said, “[At] Roland Garros, he’s definitely one of the main favorites, no doubt, even though he has never reached the second week of a Grand Slam.

“With everything recently that he has achieved, he deserves to be one of the favorites. He definitely is special. Already he’s breaking a lot of records as a teenager, winning two Masters events this year, a couple of [ATP] 500s.

“So far he’s the best player in the world, no question, this year. The way he was dealing with the pressure. I mean, in our match a few days ago, how calm he was all the way, was impressive. He deserved to win the trophy.”

On the other hand, Rafael Nadal recently said that Alcaraz can beat anyone in the world. The French Open will begin on May 22.