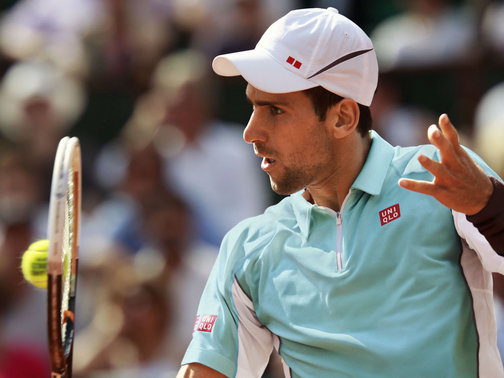 Djokovic spanked Guido Pella 6-2, 6-0, 6-2 to arrange a 3rd round match against Grigor Dimitrov.

Top-ranked Novak Djokovic finished his job before the rain set in Thursday in the French Open.

Djokovic coasted past Argentina’s Guido Pella 6-2, 6-0, 6-2 to arrange a third-round match against Grigor Dimitrov of Bulgaria.

Djokovic has captured every Grand Slam title except the French Open and has made this year’s tournament a priority.

Thursday’s match on center court was delayed and interrupted by afternoon rain. Among those interrupted was Maria Sharapova’s third-round match against teenager Eugenie Bouchard of Canada.

Dimitrov beat Djokovic in the second round of the Madrid Open 7-6 (6), 6-7 (8), 6-3. He also won a set against Nadal in the quarterfinals of the Monte Carlo Masters last month.

But Djokovic said he is looking forward to the rematch.

”I think he’s got more confident as he’s getting big wins in the last few months, and so he’s a tough player now to beat,” Djokovic said. ”Even though maybe his style of game could be better on the hard court or faster surfaces, he’s showing that he can play equally well on clay.’’