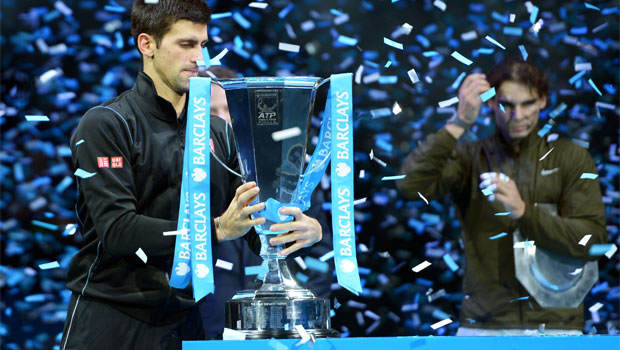 Novak Djokovic ended the 2013 campaign on a high note after defeating Rafael Nadal in the final of the ATP World Tour Finals at London’s O2 Arena on Monday evening.

The Serbian has endured a frustrating year having lost out to Nadal in the semi-finals of the French Open in June, before Andy Murray defeated him in the final at Wimbledon.

Djokovic was again on the end of another Nadal reverse at Flushing Meadows in the US Open finale in September, which also played a part in him losing his status as world number one to the Spaniard.

However, the 26-year-old has responded to that defeat in New York in impressive fashion by winning 22 matches in a row, the latest of them a convincing 6-3 6-4 victory over Nadal to retain his World Tour Finals title.

Djokovic will now open up in 2014 on a high as looks to claim the first Grand Slam title of the year at the Australian Open where he has is aiming for a fourth successive win.

He said: “The most positive thing that I can take from this two and a half months is the fact that I managed to regroup after a few big losses.

“I think I’ve worked on a few things in my game and serve that has helped me win a lot of matches in the last two months.

“This is definitely the best possible way that I can finish the season, not including the Davis Cup final that I have in a few days’ time, where of course I hope we can bring another title to our country.

“This can serve as a great platform for the 2014 season. I’m extra motivated and inspired to work and get myself, first of all, rested and recovered in the off-season, and then work on my game and get ready for the Australian Open.”