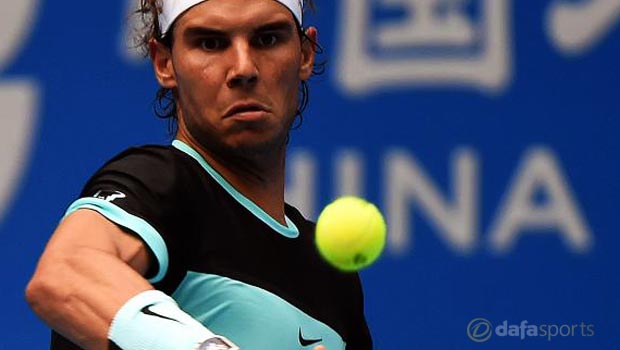 Rafael Nadal admits he is going to have to be on top of his game to beat Jack Sock in the quarter-finals of the China Open, but believes he is improving with every game he plays.

The third seed looked rusty on his first outing in Beijing on Tuesday, dropping serve four times to former ball boy Di Wu before eventually coming through in straight sets.

There were definite signs of improvement from the nine-time French Open champion in his second-round contest against Canada’s Vasek Pospisil, with the Spaniard facing only one break point in the 7-6 (7-3) 6-4 victory.

The 2005 China Open champion needed one hour and 47 minutes to see off Pospisil and came off court pleased with the performance he had produced.

“It’s a victory against a good opponent like Vasek, which is good news for me,” said Nadal. “Every victory gives me opportunities to keep practising the things that I need to practise.

“Practising outside of the competition is very important, but at the end you have to compete well. Every match is an opportunity for me.”

Nadal is looking to win his first hard-court event in 21 months, having struggled on the surface recently due to his ongoing knee issues.

However, with the likes of Tomas Berdych, Milos Raonic and Jo-Wilfried Tsonga having been eliminated already in Beijing, the 29-year-old’s hopes of a fourth title this year have improved greatly.

Nadal will need to get past rising American star Sock before he can look too far ahead and he admits the world number 30 could give him some problems.

“He’s a very good young player with a fantastic serve and a very strong forehand,” added Nadal. “He is going to be a big opponent for the quarter-finals. I will need to play better than today.”

Meanwhile, Nadal is 11.00 to win next year’s Australian Open, with defending champion Novak Djokovic at 2.15.