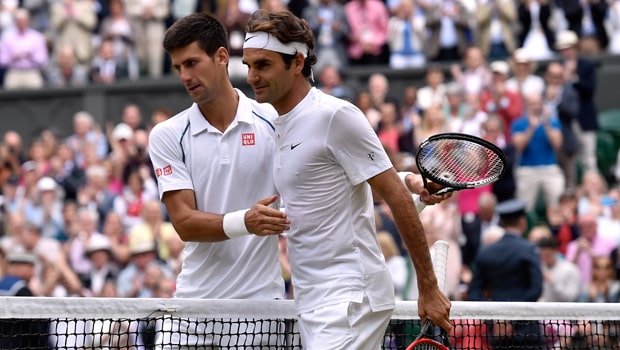 Novak Djokovic, Roger Federer and Rafael Nadal all came through their last-16 matches with plenty to spare on ‘Manic Monday’ at Wimbledon.

The second Monday at the All-England Club is viewed as the busiest day in the tennis season, with quarter-final places in the men’s and women’s draw up for grabs.

Federer reached a record-extending 17th Wimbledon quarter-final as young Italian Matteo Berrettini was overwhelmed on Centre Court, with the Swiss securing a 6-1 6-2 6-2 scoreline in one hour and 14 minutes.

Federer was content with his efforts and, crucially, delighted to win in straight sets ahead of last-eight showdown with Kei Nishikori. “I think you can always lose a Grand Slam in that first week – but you can’t win it. If you get through it with energy in the tank you’re in a good position,” he said.

“Five-setters are memorable and cool to play in but for the body it’s nice to avoid them.” Defending champion Djokovic knocked out inexperienced Frenchman Ugo Humbert, overcoming the 66th-ranked player 6-3 6-2 6-3.

French Open champion Nadal also continued his flawless transition to grass, dispatching Portugal’s Joao Sousa 6-2 6-2 6-2 with a minimum of fuss. Djokovic, booking his 11th Wimbledon quarter-final, has dropped just one set in his four matches to this point but the Serb is not focusing on energy conservation.

“I don’t think about trying to conserve energy to be honest, I try to focus on what needs to be done to win the match,” he said. “I was very pleased to execute the job in three sets.”

Djokovic is favourite at 1.67 to win Wimbledon once more, with both Federer and Nadal priced at 4.50 going into the quarter-finals.