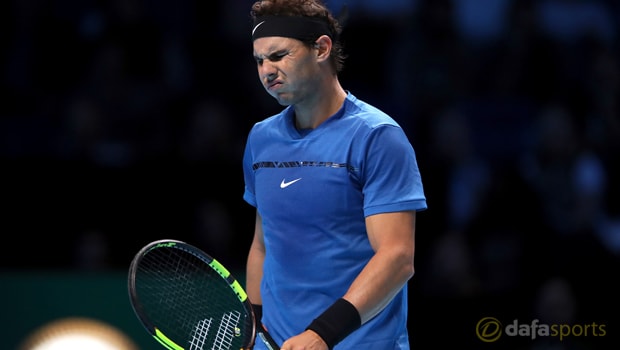 World number one Rafael Nadal admits he had no choice but to withdraw from the ATP Finals in London as he now looks to plan ahead for 2018.

The Spaniard had been struggling to train after he withdrew from the Paris Masters with a knee injury.

He showed his determination and bravery as he played on with the injury before losing in three sets to David Goffin on Monday night.

He told reporters: “No, I am off. My season is finished. Yeah, I had the commitment with the event, with the city, with myself.

“It’s about the pain. I cannot hold with enough power to keep playing.

I tried but seriously it was a miracle to be very close in the score during the match. It really doesn’t make sense.”

Nadal will now be replaced by fellow Spaniard Pablo Carreno Busta and he will meet Dominic Thiem on Wednesday.

Goffin moves on to do battle with Grigor Dimitrov and the winner is almost certain to progress to the semi-finals.

With the Australian Open on the horizon at the start of 2018, Nadal will be doing all he can to feature in Melbourne.

The ‘King of Clay’ is the second favourite for the tournament at odds of 4.00.