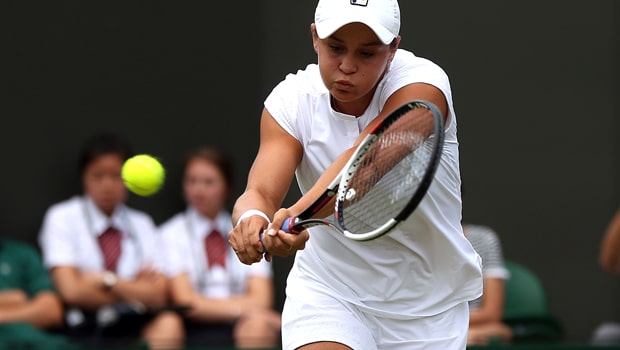 Ashleigh Barty completed a fairytale comeback in her tennis career as she won the Australian Open at Roland Garros, defeating Marketa Vondrousova 6-1 6-3.

It was the maiden Grand Slam success of the Australian’s career and arrived almost three years to the day after she returned to the sport, ranked 623rd in the world.

Barty quit tennis to play professional cricket in 2014, but returned to the sport 17 months later and now, at 23-years-old, has reached the summit of the women’s game for the first time.

Czech teenager Vondrousova was nervous in the opening exchanges of the final, as Barty claimed the opening set in just 29 minutes.

The Aussie broke serve again in the opening game of the second set and Vondrousova came close to a break back in game two, Barty held firm and pushed home her advantage to win the match.

Her dominance in the tussle was rubberstamped in the final game, Barty recovering from a 15-40 deficit into a match-winning break of serve with four straight winners.

The Queenslander is the first Australian to win a singles titles in the French capital since Margaret Court in 1973.

“It is unbelievable, I’m a little speechless, I played almost the perfect match,” Barty said. “It has been a crazy two weeks.

“It is a special place here for Australian players and I’m incredibly proud of what I’ve been able to achieve.”

Barty can be backed at 9.50 to double her tally by winning next month’s Wimbledon crown, with world number one Naomi Osaka priced at 8.50.