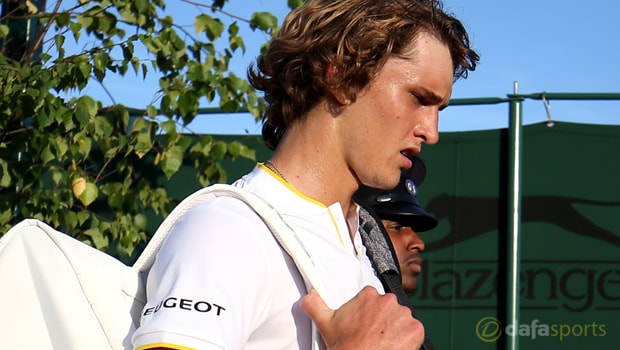 Alexander Zverev admits it will be an ‘honour’ to play at next week’s ATP World Tour Finals.

The German has enjoyed a breakthrough year on the ATP Tour, winning five titles, including victories over Novak Djokovic and Roger Federer in the finals of the Italian Open and Rogers Cup respectively.

Those impressive results helped the 20-year-old secure his place at the end of season event for the first time and he admits he already feels like a winner, regardless of how he performs at London’s O2 Arena.

“Playing in the ATP Tour Finals is like winning a tournament already,” Zverev said.

“Qualifying for London shows that you have been playing at a top 10 level the whole year.”

Zverev will face 19-time major winner Federer, former US Open champion Marin Cilic and fellow debutante Jack Sock in his group for the tournament and he admits it is a great honour to come up against such world-class opposition.

“It’s an honour to play there in London, it’s my first time and hopefully not my last,” he added.

“I will try to prepare myself as well as I can and try to win many matches there.

“It’s completely different because you play one of the top eight in the first match, so that’s something very special and you have to play your best from the early rounds.”

Zverev is priced at 9.00 to win the tournament, while Federer, who is available at 1.50, and world number one Rafael Nadal, who is on offer at 4.75, are expected to be the players to beat in London.