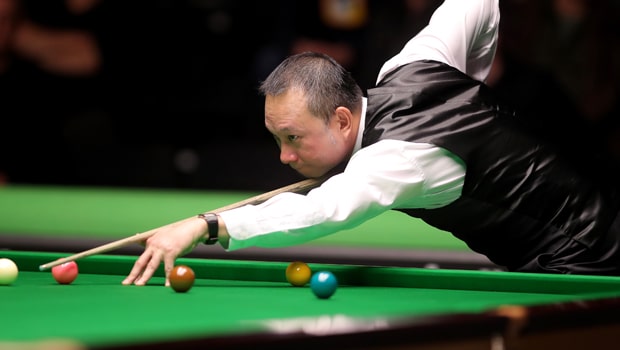 The carnage at the China Open has continued at pace as round one ended with a host of big names sent packing, including five of the world’s top ten.

With Mark Selby amongst the day one fallers, day two witnessed Judd Trump, John Higgins, Mark Williams, Ding Junhui and Barry Hawkins all being cast aside.

An unexpected set of results leaves world number seven Neil Robertson as the highest ranked player left standing in Beijing as the last 32 gets underway.

Trump has been enjoying a stunning run of form this season but his confidence will have taken a dent as he lost 6-5 to Robbie Williams.

Williams had coasted into a 3-0 lead before Trump got going, with the ‘Ace in the Pack’ rallying to pot the final black and force a deciding frame having trailed 5-4, but the decisive frame was scrappy and eventually went Williams’ way on the colours after a loose safety from Trump on the green.

Hawkins, a multiple ranking event winner, was also to be edged out in a deciding frame, losing to Chinese player Li Hang. Ding, with just one ranking event quarter-final appearance on his resume this season, fell to veteran James Wattana.

The Thai, now 49, rolled back the years as he stroked in breaks of 81, 99 and 98 en route to a 6-3 success against the home favourite. World champion Williams was stung in a high-quality loss to 1997 Crucible kingpin Ken Doherty, another one-up for the veterans.

Stephen Maguire managed to avoid finding his way onto the Beijing casualty list, as he dismissed Xu Si 6-1.

Wattana is 2.88 to continue his renaissance on Wednesday when he faces Li Haotian in the last-32, while Maguire can be backed at 1.50 to turn over fellow Scot Anthony McGill.