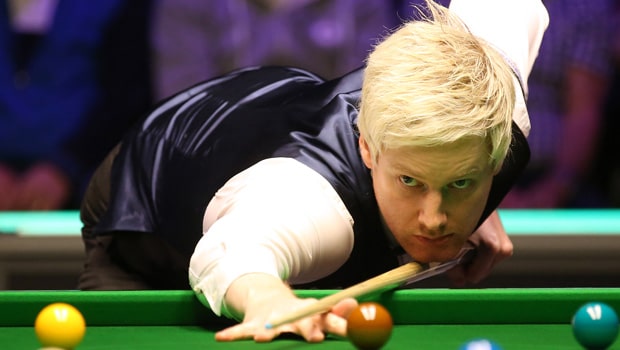 Neil Robertson showed no mercy as he masterfully thrashed Lu Ning 6-1 in the first round of the ongoing 2021 Players Championship.

2010 world champion and Australian number three seed Neil Robertson made it an easy whitewash in his game against Lu Ning. He easily advanced to the quarter-finals of the 2021 Players Championship at the Marshall Arena, Milton Keynes.

The 39-year-old Robertson defeated the Chinese player with ease throughout the game. He was able to hit four centuries in his win over his opponent, while 27-year-old Chinese Lu Ning was scoreless throughout the final three frames.

Robertson, who is also a three-time finalist at the Players Championship, was in absolute control of the match after they had both shared the first two frames. However, in time, the world number 2 gradually gained control, knocking in runs of 135, 130, 82, 142, and 132 as Lu was unable to do anything.

Neil Robertson delivered on the night and proved to all that he is still one of the best attacking talents in snooker. His advancement means that he has set up a quarter-final clash against Kyren Wilson, who eliminated Ryan Day by 6-1 on Monday night.

In other games, Jack Lisowski secured himself a 6-3 win over Martin Gould. The big shock of the day was Judd Trump getting eliminated by Stuart Bingham. Judd Trump’s suffered more disappointment on Monday was knocked out of the 2021 Players Championship in the first round. The defending champion was edged out by Stuart Bingham 6-5.

The 2021 Players Championship is the 11th ranking event of the snooker season, and it comes after last week’s Welsh Open.

The prize money of the 2021 Players Championship is as follows: