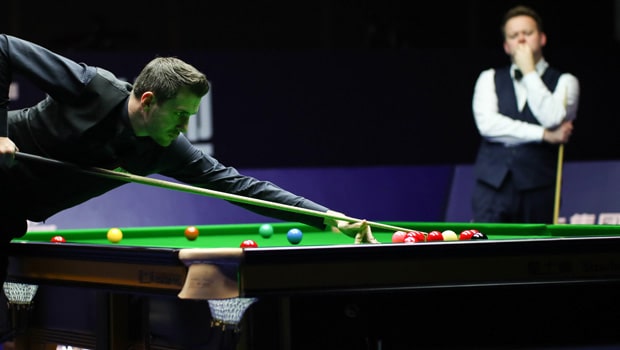 Shaun Murphy and Mark Selby both got themselves decisive wins that secured them a place in the round of 16 of the ongoing 2021 Snooker World Championship.

Shaun Murphy came back from 5-3 down to earn his spot in the last 16, with a remarkable 10-7 win over Mark Davis. Murphy, 38, who won the 2005 World Championship discovered his magic touch, as he pulled off an astonishing comeback to overcome Mark Davis.

Mark Davis was making his 12th appearance at the World Championship and had a very good game in the opening session as he raced to a 5-3 lead.

However, Murphy got a century in the final frame, and reduced the deficit to 5-4, and was much better on the resumption.

The world number seven had breaks of 56 and 92 and which enabled him to win four of the next five frames to get an 8-6 lead. After sharing the next two, the Magician got over the line with a stunning 131 and won by 10-7.

Meanwhile, Three-time World champion Mark Selby also advanced to the second round with a convincing 10-1 thrashing of qualifier Kurt Maflin.

The 37-year-old Englishman needed just two frames to move to the next round. He scored two tons and six further breaks of more than 50 in a comfortable opening session. Kurt Maflin was very poor for a player who reached the Crucible quarter-finals last season.

The world number four wasted no time in dispatching Maflin and progressing to the next round.

Maflin, who is currently the world number 25, should have got himself a second frame on the board at 9-1 down, but missed the final black and left it over the pocket for Selby.

Murphy will now face the reigning Masters champion, China’s Yan Bingtao, in round two. While Selby has set up a last-16 meeting with Northern Ireland’s Mark Allen.