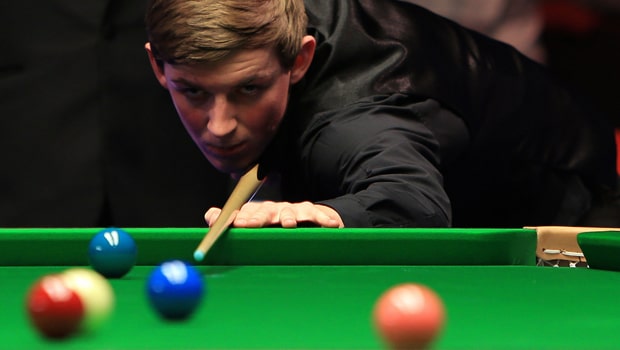 James Cahill had to summon all his inner steel to hold off a charge from Andrew Higginson in winning 10-9 at the World Championship qualifying in Sheffield.

Cahill, who is competing as a Q-School top up for a place at Crucible, appeared to be headed for a smooth success when he led 7-0 and 8-2 in the best-of-19 match, only for 2007 Welsh Open runner-up Higginson to launch a spectacular comeback charge.

Higginson won seven frames without reply to lead 9-8, seemingly with his opponent on the canvas, before Cahill summoned the strength to deliver the knockout blows.

He showed great fortitude to turn the momentum and win a tightly-contested 18th frame, before compiling a break of 56 that gave him the platform to win the deciding frame.

The significance of Cahill’s win is heightened by the fact that it keeps his hopes of regaining professional status this week, as well as steering him closer to the Crucible and the World Championship first round proper.

“I played really well yesterday, but today was just a different game. He played well and I don’t think I did that much wrong to go 9-8 down,” said 23-year-old Cahill.

“It’s just a bit of a shame that we had to play each other, because we are good friends off the table and practice together, it was a tough draw for us both.

“I think I showed a lot of character having been 7-0 and 8-2 up and then 9-8 down. I think it takes something special to then come back and win from there.

“I’m under a different sort of pressure to what Andrew is under. In the back of my mind, I know I have to win to give myself any chance of coming through the one-year list to get a tour card. However, I know that everyone is under pressure this week.”