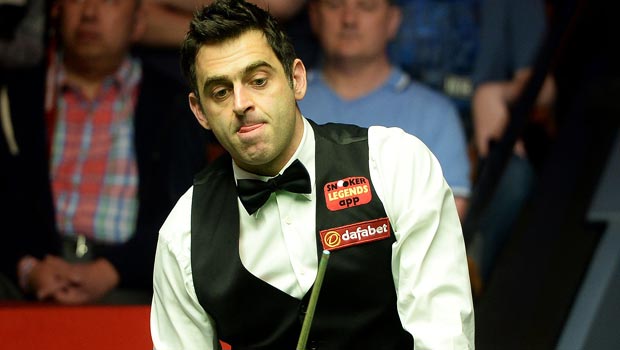 Selby, who has never managed to land the world title, won the final two frames of the evening session on Sunday after it appeared the defending champion was set to take a commanding lead.

O’Sullivan won the first three frames of the opening sessions as Selby looked out of sorts, possibly as a result of his gruelling 17-15 semi-final victory against Neil Robertson on Saturday.

However, Selby battled back to 5-3 and the match followed a similar pattern in the second session as O’Sullivan, who is seeking a sixth title at the Crucible and a third in succession, seemed on course to blow his opponent away.

The 38-year-old opened up an 8-3 lead but was pegged back to 8-5 by Selby, who managed a break of 55 in the 12th frame before an unfortunate O’Sullivan foul on the final green allowed the world number two back into the frame and the match.

The five-time champion then stepped up and just 20 minutes later O’Sullivan had again opened up a five-frame lead, grabbing his 12th century of the tournament in the process.

Selby managed his two highest breaks of the match in the final two frames on Sunday, with 58 and 62, to reduce the deficit and give himself a chance heading into the final two sessions on Monday.

Selby can be backed at 6.00 to win the match and O’Sullivan is 1.13 to secure the victory.