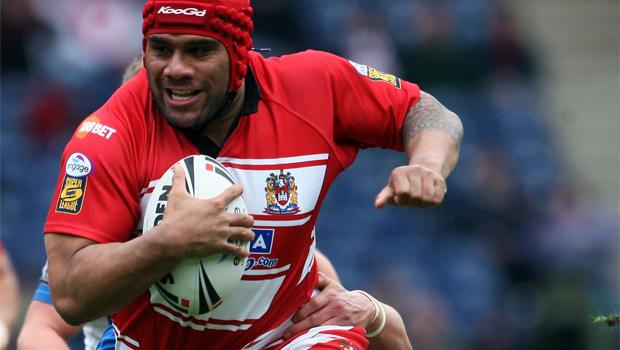 Former Wigan and New Zealand Warriors prop Iafeta Paleaaesina is set to return to Super League after penning a two-year deal with Hull.

The 31-year-old has become Hull’s third signing for 2014 following on from the arrivals of fellow front-rower Mickey Paea and Castleford centre or second-rower Jordan Thompson.

Paleaaesina left Super League outfit Salford 12 months ago and has spent the last year playing for Limoux in the French Elite League.

The former Wigan man is looking forward to returning to Super League and says he will be raring to go for the start of pre-season.

“I’ve enjoyed my time in France but now I am ready to come back to Super League and I’m grateful to Hull for giving me that opportunity,” Paleaaesina said.

“I’ve kept myself in good condition over the summer and, as soon as pre-season gets under way, I’ll be there doing my best to impress.”

The arrival of Paleaaesina and Paea will give the Hull squad a boost after Australian Mark O’Meley retired, while Andy Lynch is expected to confirm his return to Castleford in the coming weeks.

Hull coach Peter Gentle is also delighted with the addition of Paleaaesina and believes he will add some much-needed experience to his youthful side.

“Feka will be a really useful addition for us and he certainly brings a bit of balance to our squad for 2014,” he said.

“We’re running with quite a young squad next year and losing a few senior players, so his experience will be great for us and he understands what it takes to play in Super League.

“I’ve never seen him look fitter or more determined and he’s almost unrecognisable from the player we saw a few seasons ago in Super League but he still has that physical intimidating presence that we’ve seen him show both in the NRL and here.”