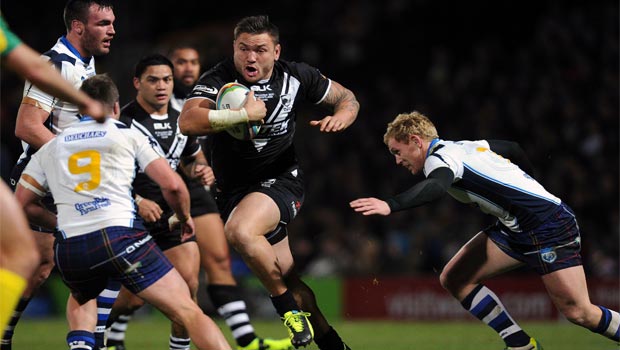 Unbeaten Scotland and World Cup holders New Zealand both have injury concerns going into their quarter-final clash at Headingley on Friday.

Steve McCormack’s side have been one of the surprise packages of the competition, but Scotland could be without three-quarter Alex Hurst while Ben Fisher is sidelined by a calf injury and Dale Ferguson suspended.

Brett Carter is on stand-by to start after Hurst limped out of the Bravehearts’ training session, but McCormack can recall first-choice hooker Ian Henderson and centre Kane Linnett after they missed the final group match with knee and rib injuries respectively.

The returning duo replace Andrew Henderson and suspended three-quarter Ferguson who unsuccessfully appealed the two-match ban by a review panel for a dangerous tackle on hooker Tui Samoa during Friday’s 22-8 win over the United States.

The Kiwis will make a late check on winger Manu Vatuvei, who has a slight knee injury, but coach Stephen Kearney will make at least four changes to the team that beat Papua New Guinea in their last group match which was also at Headingley.

Kevin Locke gets the nod ahead of Josh Hoffman at full-back after he went off with a shoulder injury in the 52-10 victory over the Kumuls. Skipper Simon Mannering, prop Jared Waerea-Hargreaves and second rower Frank Pritchard all return after being rested.

Loose forward Elijah Taylor is expected to get a spot on the bench and may be asked to provide cover at dummy half following the loss of former Wigan hooker or half-back Thomas Leuluai with a recurrence of a groin injury.

McCormack knows how big a task awaits his Bravehearts side in their last-eight clash, but believes he has spotted some weaknesses in the world champions’ game.

“For Scotland to be playing the Kiwis on Friday night at Headingley, I think it is an outstanding achievement so far and we can’t wait for that,” he told the BBC.