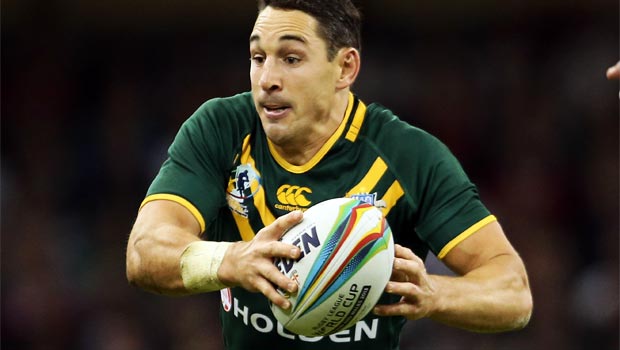 Australia have been boosted by the news star full-back Billy Slater will be fit for Saturday’s World Cup final against New Zealand.

Slater was forced to sit out the semi-final win over Fiji after suffering a recurrence of a knee injury against the USA in the quarters, but he should be fit for weekend.

Coach Tim Sheens has revealed Slater trained on Wednesday and as long as he does not suffer any reaction, he will be fit to face the Kiwis.

Greg Inglis is on standby to play at full-back again should Slater be ruled out, otherwise he will switch back to centre.

Captain Cameron Smith says Slater was given a tough time in training to ensure he will be fully fit.

“He got a fair work-out today, I’ll tell you that,” Smith said. “Big Inglis got hold of him a couple of times and threw him around.

“The one thing I can say is that he’ll give himself every opportunity. He’s very diligent with his recovery and his rehab and he’ll be working around the clock to get himself right.

“The issue he’s had is not so much the damage in his knee, because he hasn’t got much in there to damage. He’s already got rid of all his ligaments in his knee. It’s just the swelling in there.”

Meanwhile, New Zealand have doubts over winger Manu Vatuvei and second row Frank Pritchard, but there is better news over Roger Tuivasa-Sheck, who has recovered from an ankle injury.