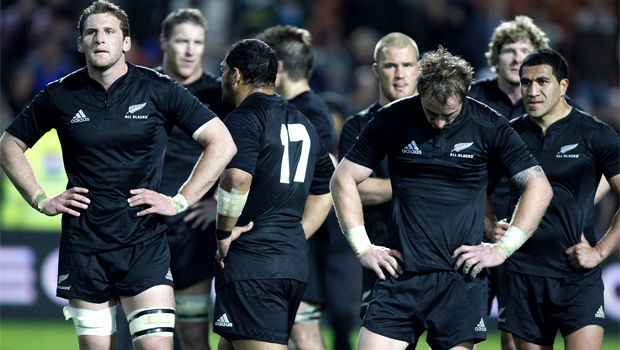 New Zealand demonstrated exactly why they are the strong favourites to win their second successive Rugby Championship title after beating Australia 27-16 in Wellington.

The Wallabies were looking to bounce back from a 29-47 mauling at the hands of the All Blacks on home territory last week and made the more positive start of the two sides, going 6-0 up through two Christian Leali’ifano penalties.

However, their tormentor-in-chief of last week, Ben Smith, who scored a hat-trick in Sydney, did not take long to find the try-scoring formula with a brace before the interval to completely change the momentum of the game.

The home side were more clinical and the ability to take advantage of opportunities when under pressure will stand them in good stead – not only for the rest of the tournament but for their defence of the World Cup in 2015.

“For the first 30 minutes, we were under the pump,” All Blacks captain Richie McCaw said. “We were just beaten to the punch in the contact areas.

“But when we got our opportunities, because momentum does change, we managed to capitalise on it and that’s the way you’ve got to do it in rugby these days.

“I thought we took good options tonight, our kicking was good and we took our chances.”

The win was achieved without a host of first-choice fly-halves as well, including talismanic playmaker Dan Carter, with debutant Tom Taylor contributing 14 points through four penalties and a conversion.

New Zealand have extended their dominance over the Wallabies, winning 16 of the last 19 meetings, retaining the Bledisloe Cup for the 11th consecutive year and remaining unbeaten on home soil against their arch rivals since 2003.

Next up for the champions-elect is a home clash against Argentina, who face South Africa in Mendoza on Saturday night, having been pummelled by the Springboks 73-13 last weekend.