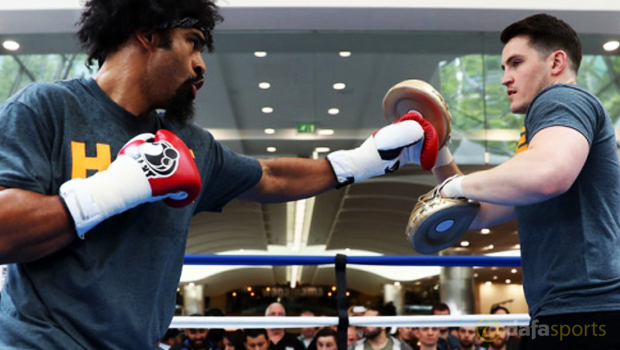 Trainer Shane McGuigan insists heavyweight David Haye has impressed him during his camp for his upcoming fight against Arnold Gjergjaj.

The former heavyweight world champion will return to the ring for the second time since he announced his comeback following a three-year break.

The ‘Hayemaker’ was forced to retire at one point due to shoulder surgery but a first-round win over Mark de Mori in January has made him hungry for more.

He is hoping to take on the likes of Deontay Wilder, Anthony Joshua and Tyson Fury in the future but McGuigan admits he had doubts over his attitude.

However, he admits Haye has continued to learn and has worked tirelessly to ensure he adds another victory to his record.

McGuigan told Sky Sports: “It’s a work in progress with David. I’ve got to make sure he’s doing the correct training outside of boxing, the correct strength training to ensure his body is in balance and firing up.

He was spending a lot of time away from the gym. Now he’s fit and healthy, I want to keep him in the gym as much as possible.

“Obviously, he likes a late night now and again but that’s up to me to make sure that I voice my opinion.

I’ve said to him that ‘you do it my way or you don’t do it and you find yourself another trainer’ and he’s thrown himself into it.

That’s why I feel I’m getting the best results from him.”

Haye is the heavy favourite to win the fight and he can backed at odds of 4.00 to win in round one once again.