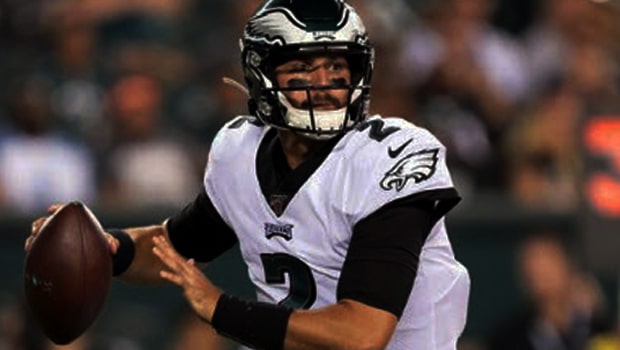 Cody Kessler will become New England Patriots third Quarterback according to a report by ESPN.

Kessler, who was a part of the Eagles team during the summer, was dropped after Nate Sudfeld & Josh McCown were favorites behind Carson Wentz.

After fourth-round pick, Jarrett Stidham’s unconvincing performance in his regular-season debut on Sunday was replaced by Tom Brady, whom he is a backup to in the Patriots squad.

During the Patriots’ 30-14 win over the New York Jets on Sunday, Stidham made two 14yards passes which was completed, but his third attempted pass was intercepted before being replaced by Brady.

However, with Kessler’s move, it looks like the Patriots may just have reconsidered Stidham’s position as the main back up. The Patriots head coach Bill Belichick in an interview on Wednesday hinted that the decision to sign another Quarterback was because of Roster Management.

“Whatever our decisions are, it would be more roster management,” Jarrett’s been with us all the way through, practiced every day, He’s gotten a lot of reps in the offense intermittently depending on the situation from week to week, preseason, regular season,” Belichick said.

“Again, depending on what we were doing at that particular point in time, whether it be preseason games or training camp practices or regular-season practices. Yup, he’s coming along well,” he concluded.

Although the Patriots were interested in bringing back Brian Hoyer, whom they let go during the period of roster cuts, his move to Indianapolis Colts meant they had to look elsewhere after Tom Brady struggled with injury last week.

Patriots will now have to open another roster spot in the coming weeks after Ben Watson’s four-match suspension elapses, while Kessler will be their 53rd player this season.

New England Patriots are backed at 2.55 to win the NFL AFC Conference, while fellow contenders Kansas City Chiefs are available at 3.20.