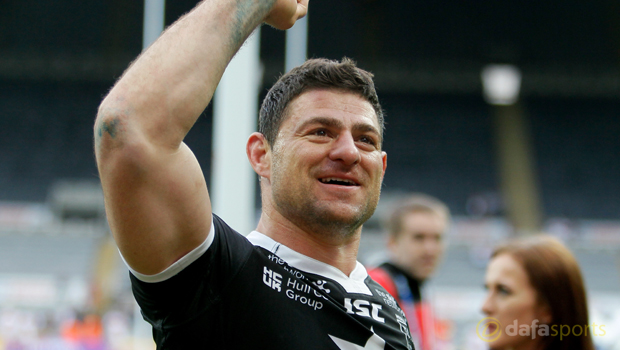 Hull FC star Mark Minichiello believes the Super League table-toppers will have to be at their best to see off Wigan Warriors and secure a Challenge Cup final spot.

The Black and Whites face Wigan on Friday night at the Keepmoat Stadium in Doncaster, with the winner set to take on either Warrington or Wakefield – who contest the other semi-final on Saturday – at Wembley in August.

Minichiello joined Hull FC from Gold Coast Titans of the NRL ahead of the 2015 season and the 34-year-old second-rower admits he didn’t know a great deal about the Challenge Cup when he first moved to England.

However, the Australian is now well aware of just how significant the famous cup competition is to the British players and fans and he is eager to help his side down the Warriors and book a trip to Wembley.

“To be honest, when I first came here I didn’t know too much about it,” he told his club’s official website.

“I’ve been here for almost two years now and you realise how special the Challenge Cup is to the players over here.

You can’t help being caught up in that, you want to be part of it. “When you look at the history of it, it would be a great achievement to go on and win it.

It’s one thing that I really want to achieve whilst I’m over here with Hull FC. “To be able to play at Wembley and lift the trophy at the end of the day would be one of the biggest things achievements of my career.

The history behind it is massive, it’s the oldest competition in the world and I want to be able to say that we’ve won it.”

Hull are 2.20 to beat Wigan on Friday or 6.50 to win by 6-10 points, and Minichiello feels his side will have to be at the top of their game to emerge victorious.

He added: “They’re a tough team to play and you know you’re always in a game when you play them. “It’s the semi-final of the Cup, the intensity will rise and it’s going to be a real classic game. Hopefully at the end of the day it’s us going to Wembley.”