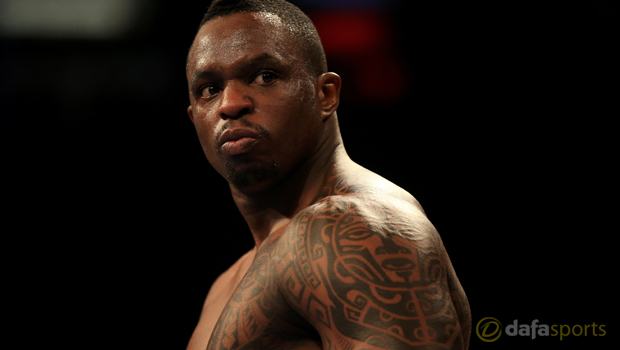 Heavyweight Dillian Whyte has claimed he will punish Dave Allen this weekend when they meet for the WBC International title on Saturday night.

The duo have continued to clash on social media in the last few weeks but they will eventually settle their differences at the First Direct Arena in Leeds.

The pair will compete on the undercard of Josh Warrington’s WBC featherweight title defence against Patrick Hyland, while Luke Campbell and Tommy Coyle are also on the card but it could be the heavyweight clash that produces the fireworks on Saturday.

Whyte is determined to prove his class this weekend as he tries to earn a rematch against IBF world champion Anthony Joshua.

Whyte returned from a shoulder injury last month when he beat Ivica Bacurin and he is the more experienced of the two.

Allen comes into the bout on the back of 10 fights and Whyte, who has 16 wins and one loss on his record, believes he is stepping up a level too soon.

He told Sky Sports: “He has always been shouting for the fight and now he has got it. I am more experienced than him, I am a better boxer than him and I am a better fighter than him.

“If I knock him out in round one, two, six, seven or eight, it doesn’t matter – I just want to punish and hurt him bad.

I want him to sit in his corner across the ring and look at me and think, ‘I have bitten off more than I can chew here’.”