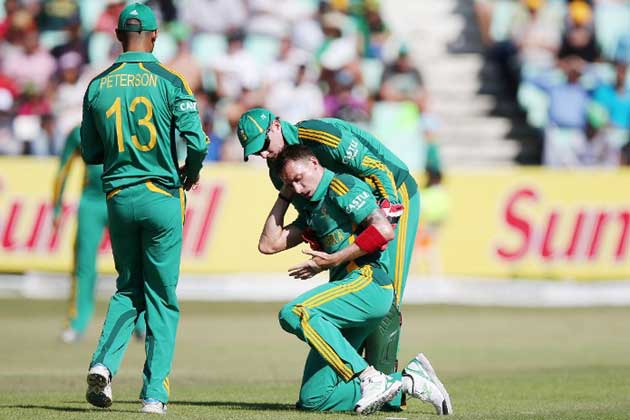 South Africa strike bowler Dale Steyn suffered a back injury in warm-up defeat at the hands of Pakistan.

South Africa are sweating over the fitness of Dale Steyn after the strike bowler suffered a back injury in the warm-up defeat at the hands of Pakistan on Monday.

The Proteas were never at the races against Misbah-ul-Haq’s men as Asad Ali and Wahab Riaz both took three wickets to reduce them to 83-7 and put them in a massive hole.

JP Duminy scored a very patient 43 and Ryan McLaren top-scored with a fine 55 to at least get the total above 200, although it was never enough as Imran Farhat and Mohammad Hafeez scored half-centuries to help Pakistan ease home.

Steyn was only able to bowl five overs before leaving the field and South Africa are hoping that the news over the next couple of days will be in their favour.

“Dale experienced some tightness in his lower left back and left the field after bowling five overs. He is receiving treatment and will be monitored closely in the next 48 hours,” read a statement from Cricket South Africa.

Captain AB de Villiers was obviously disappointed by the six-wicket defeat but insists that the result will have no bearing on the tournament proper and is confident his players will turn up when the real action begins.

“I am comfortable with where the boys are at right now, the batters have been playing really well,” De Villiers said.

“I have watched the guys in the nets and once we get going in the tournament each player will stand out when the time is right.”

South Africa are drawn in Group B and open their tournament against India in Cardiff on Thursday, face Pakistan in Edgbaston on Monday before returning to Sophia Gardens to finish off against West Indies on June 14.