Posted by Vincent Henderson on December 16, 2016 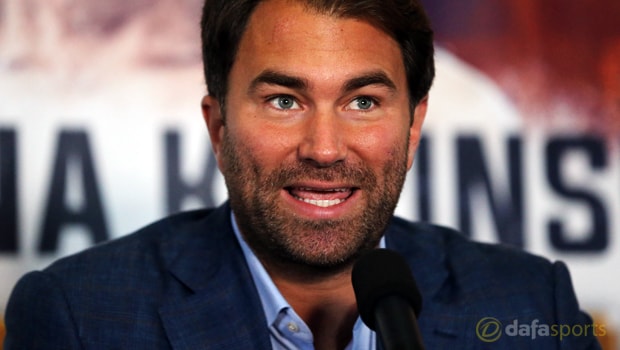 Promoter Eddie Hearn says there could potentially be a rematch on the cards between British heavyweights Dillian Whyte and Dereck Chisora insisting it would sell out the O2 in London.

The duo created real drama and plenty of interest ahead of their clash on the undercard of Anthony Joshua and Eric Molina in Manchester on December 10.

The showpiece didn’t disappoint either as they went the distance in an entertaining bout which had everyone on the edge of their seats.

Whyte came out the victor via a split decision from the judges but it was only minor details that saw him pick up a 20th professional win.

The fight was an eliminator for the WBC title but Hearn has admitted there is potential to see them go toe-to-toe once again.

However, he says Whyte would rather focus on going in search of a world title and has ruled out seeing the two Brits face off again on the Joshua Wladimir Klitschko undercard on April 29 at Wembley Stadium.

Hearn said: “I think it’s moved Whyte up the rankings, he’s No 6 now and I would try and make a final eliminator for him but a lot of people want to see the Chisora rematch.

“That’s an option but I think both of them should have a long rest so they’ll be ready to fight again in May.

“I’d like to see the fight again but obviously Dillian wants to fight for world titles as well.

But I like the Chisora rematch; it’s a big fight, a good fight for a Saturday Fight Night and I think it could sell out The O2.

“I think it might be a little bit too big for that [an undercard fight] now and I’d quite like to see them get their own bill.”