Posted by Vincent Henderson on December 20, 2015 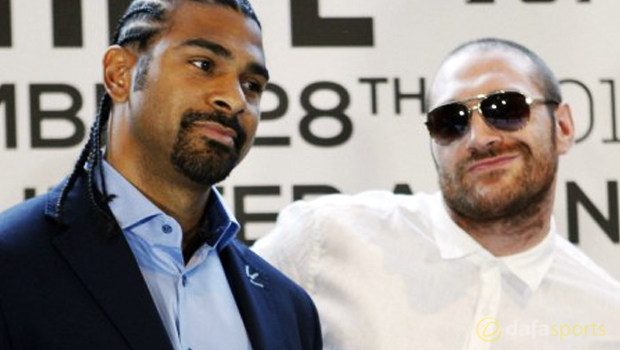 David Haye has questioned Tyson Fury’s motives for binding himself to a rematch clause against Wladimir Klitschko following his recent victory over the Ukrainian.

Fury caused a huge upset when he beat Klitschko on a unanimous points decision in November to claim the WBO, IBO, IBF and WBA heavyweight belts.

Ahead of the fight it was revealed that the pair had included a rematch clause in their contract, despite Fury not being permitted to agree to the condition due to his status as the mandatory challenger.

The decision has been met with a number of question marks within the boxing fraternity, especially as the victory would have given Fury an advantage in negotiations should the former champion want another bout.

Haye himself says he is surprised by the situation, accusing the champion of only being in the fight game for the money.

The Londoner, himself a former WBA heavyweight champion, is due to return to the ring on January 16 after three years out, taking on Australian Mark de Mori at the O2 Arena.

With him making no secret of his desire to get back to the top, he is currently 1.04 to make a winning return, with his opponent De Mori available at 11.00, and the draw at 26.00.

Haye admits he was shocked by Fury’s call to automatically give Klitschko another go, admitting he believes the champion could well have made the decision with money on his mind.

“Why sign a rematch clause?” Haye told the Sun. “I’ve never known anyone to do that — unless you’re after cash.