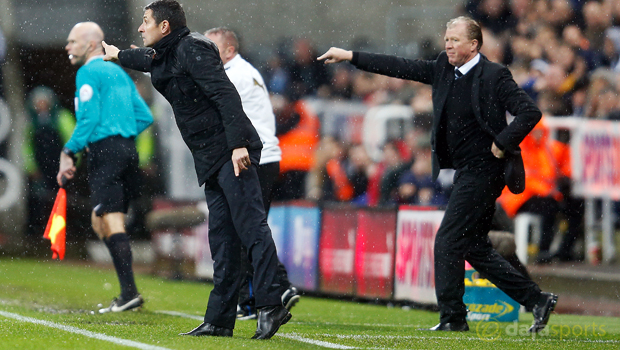 Aston Villa boss Remi Garde says he saw plenty to be optimistic about in Saturday’s battling 1-1 draw at Newcastle.

On a wet and wild evening in the North East, the Villans, who are the 1.10 favourites to go down, went behind before half time to a Fabricio Coloccini goal but clawed their way back into the game and deservedly earned a draw thanks to Jordan Ayew’s wonder strike.

Despite their display, the result left Garde’s men rooted to the bottom of the table and in big trouble heading into Christmas.

Although Villa tried to play their favoured passing game in the early stages of the match, introducing Rudi Gestede on the hour mark gave them new life and it appears a more direct approach could suit them going forward.

Next up for Villa is West Ham on Boxing Day, a game they are available at 2.70 to win, with the draw at 3.20 and the Hammers marginal 2.63 favourites.

Garde admits his players are struggling for confidence following their poor first half of the season but says they have plenty of positive points to work on after grinding out a point on Saturday.

“When you are bottom of the league, the confidence is not straight away within the game,” Garde told reporters. “We have to battle for that and when we are in a situation where we have nothing to lose, we start to play and that was the case this afternoon.

“The difficulty is to do it for 90 minutes, this is our problem currently, to play a whole football game with intensity, to win the duels at the start of the game.