Posted by Vincent Henderson on February 25, 2016 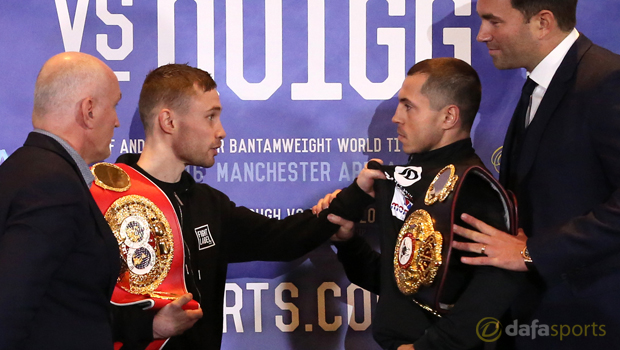 Carl Frampton believes he will secure a one-sided victory over Scott Quigg when the fighters go head to head in Manchester on Saturday.

The Northern Irishman will put his IBF Super Bantamweight title on the line against WBA champion Quigg, in what will be a unification bout at Manchester Arena.

Both fighters are unbeaten in professional boxing, with Frampton winning all of his 21 scraps to date, while Quigg has 31 victories and two draws from his 33 fights.

Frampton, however, is confident he can bring his opponent’s unbeaten record to an emphatic end on Saturday, and believes the victory will be so comfortable that there will be no talk of a rematch afterwards.

He said: “I believe this fight is going to be so one-sided, it will not justify a rematch, TV will not want, Scott Quigg will not want it and will move on to bigger and better things.”

The 29-year-old secured his IBF crown by beating Kiko Martínez in September 2014 and he has already successfully defended his title on two occasions since that success.

The Belfast native is now looking forward to competing in Manchester for the very first time and is anticipating a fantastic atmosphere come fight night.

“It’s huge, absolutely huge. The fight against Kiko Martinez, in a purpose-built arena in Belfast, was pretty spectacular,” he added. “But, I imagine this is going to be every bit as good, if not a bit better. It’s a huge occasion, a long time coming and I am excited now.”