Posted by Vincent Henderson on April 5, 2016 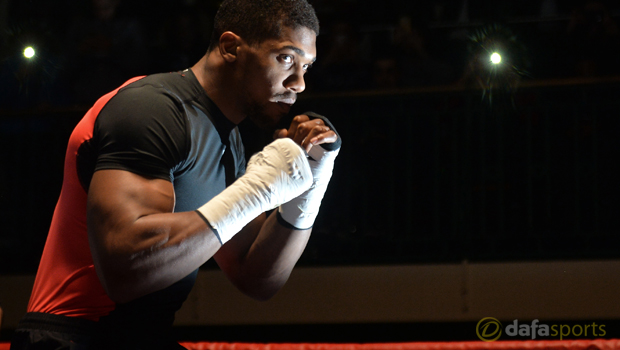 Anthony Joshua claims he will take the lessons he learned from his tough fight against Dillian Whyte into his world heavyweight title showdown against IBF champion Charles Martin on Saturday.

The 26-year-old has enjoyed a rapid rise to stardom in the professional ranks on the back of his gold medal success at the London Olympics in 2012.

Joshua has won all of his 15 fights so far and his burgeoning reputation has earned him an earlier-than-expected chance to get his hands on a world title when he faces the undefeated American Martin on home soil at the O2 Arena this weekend.

It’s being suggested that Joshua might not be ready, but the Watford fighter is adamant that he has picked up things to work and improve on from his bout with Whyte which can give him the edge.

He told Sky Sports: “There’s some good and a lot of bad. I need to keep my shape. When I’m rolling shots, don’t look at the ground. Roll like a boxer, don’t roll like a novice – that’s from the street. I need to establish my authority behind the jab, don’t be countering him from two foot out, get in close, but when I counter, move my feet, counter, and then get out – little things like that.

“When I was fighting Dillian I was eager to just hurt him with one punch, but it’s the flurry of punches that put you down at heavyweight.”

Joshua added: “In my last fight I was very sharp with my upper body but too lazy with my feet, so I’m just switching that around and it’s been working really well. Moving in, moving out, moving across and you always put someone in the position where your hands go and that’s what I’ve been working on.”