Boxing: American Bernard Hopkins aiming to bow out in style

Posted by Vincent Henderson on December 14, 2016 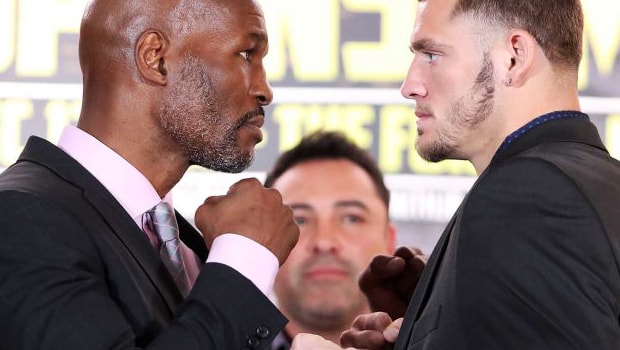 American Bernard Hopkins is confident he can end his career on a high when he takes on Joe Smith Jr on Saturday night.

The 51-year-old will bring an end to his glittering career after the bout and he is confident of beating Smith Jr, who was not even born when Hopkins made his debut.

Hopkins will take part in his 66th fight at The Forum in California and he will be looking to win the WBC International light heavyweight title in the process.

The former two-weight world champion has won 55 fights to date and he made history in 2014 when he beat Beibut Shumenov to win the IBF and WBA ‘Super’ titles at the age of 49.

He lost both of those belts in August of that year after losing to Sergey Kovalev and Hopkins has not been seen inside a ring since.

Despite the likelihood of rustiness, Hopkins is adamant he will end his career on a high this weekend. “I want the book to be written good,” he told reporters.

“The last thing you remember about a good book is not the beginning, it’s the ending. I look at this as the final icing on the cake or that exclamation point. This is it. You know this is history.

“I achieved my first goal of success in the first part of my life. That was rougher than boxing.

If you know anything about Bernard Hopkins’ history, if you go into details about the inner city Philadelphia guy, who was in the penitentiary from age 17 to 25, and survived, you’d realise I became champion a long time ago.”

Hopkins is the 1.33 favourite to win on Saturday, with the draw 26.00 while Smith Jr is available at odds of 3.25 with Dafabet.