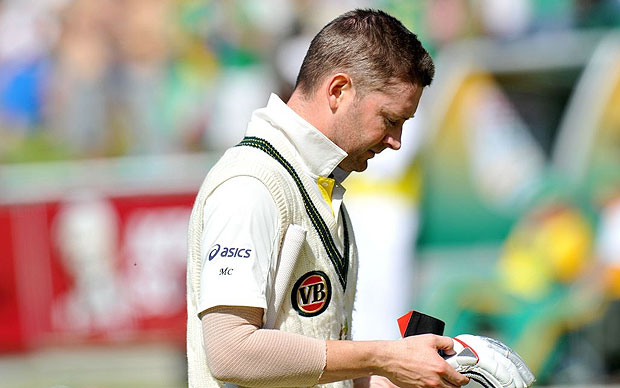 Australia’s preparations for the ICC Champions Trophy have been thrown up in the air after Michael Clarke was forced out of their final warm-up game due to his ongoing back problem.

The Aussie captain has suffered with back issues through much of his career and was ruled out of the final Test against India earlier this year, before he was forced to miss the first warm-up match against West Indies on Saturday.

His absence from the final warm-up game is obviously a big blow for the Baggy Greens as well and he will now be sent to see a specialist to determine the exact extent of the problem.

Australia do not open their Group A campaign until Saturday, when they take on old enemy England at Edgbaston, and fingers will be crossed that he will be able to take the field at the weekend.

Cricket Australia physiotherapist Alex Kountouris said: “Michael is still experiencing some lower back pain and as such is not fit for the warm-up game against India today. Michael will head to London tomorrow for specialist treatment and a decision on his fitness for next game will be made in due course.”

With back-to-back Ashes series coming up directly after the ICC Champions Trophy, it remains to be seen whether Australia will take any chances whatsoever over their captain’s fitness.

The Aussies will also have to find a new man to lead the side – if Clarke was ruled out – although former vice captain Shane Watson has insisted he will not be changing his mind over his decision to step away from the leadership of the side.

“At this point in time absolutely not,” Watson said. “I stepped down as vice-captain for a number of different reasons but at this point in time, it was certainly the best thing for the team. I’m just here to get the best out of myself and help as much as I always do anyway.”