Posted by chris schweizer on December 5, 2016 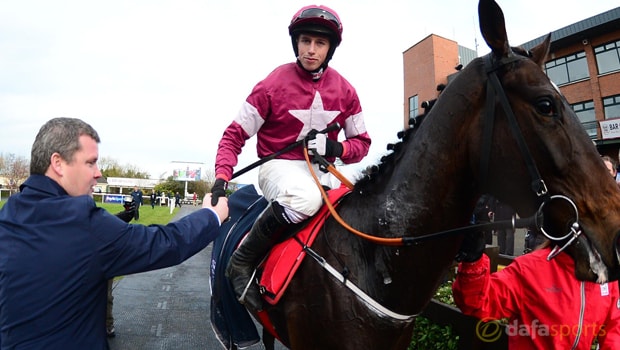 Apple’s Jade won the Hatton’s Grace Hurdle at Fairyhouse in thrilling fashion and gave her trainer Gordon Elliott a personal confidence booster in the process.

The four-year-old mare, owned by Gigginstown House Stud, was having her third start in a little over a month.

Apple’s Jade was one of the most high-profile movers this autumn when Gigginstown decided to relocate 60 horses out of champion trainer Willie Mullins’ yard.

She produced a rallying finish to deny the Mullins-trained Vroum Vroum Mag in the Hatton’s Grace, no mean feat coming just eight days on from her own agonising defeat in the Fighting Fight Hurdle at Newcastle.

Reflecting on the Fairyhouse success, Elliott thanked his owners for the trust shown in him and said he was glad to prove the doubters wrong.

“I met three or four people coming in today and they were maybe slating me for running her. I’m in a lucky position to be training for the lads and they left it up to me,” said the in-form trainer.

“We were learning a bit about her to be honest. To run in the Fighting Fifth last week and coming back here this week is a testament to how good a mare she is.”

Elliott revealed that Apple’s Jade is not going to run over the festive period and said she may have just one more run before Cheltenham in March.

While there was talk of the Champion Hurdle early in the season, the Co Meath handler no doubts where she is headed now.

“The mares’ hurdle at Cheltenham is going to be her Gold Cup.

That’s her main aim. I’m not sure where she would run beforehand, there’s a couple of races around February time that we could take in prior to Cheltenham,” he added.