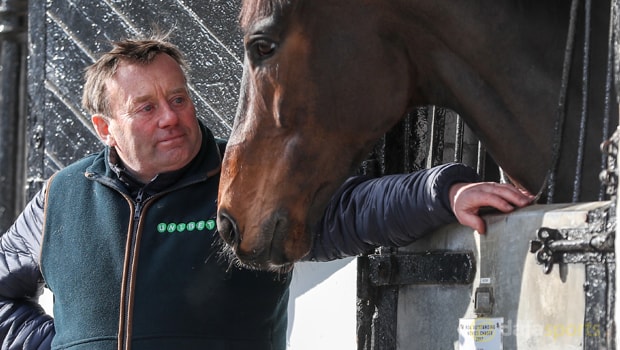 Trainer Nicky Henderson has set his sights on the Queen Mother Champion Chase for Altior after he returned from injury in fine style at Newbury on Saturday.

The eight-year-old was last seen in April 2017 winning at Sundown but an injury had derailed his plans at the start of this season.

Questions were asked after a wind operation but he was still made 1/3 favourite for the Grade Two contest as he came up against Paul Nicholls’ Politologue and Valdez.

Altior extended his winning record to 12 as he cruised home after jumping the last alongside Politologue.

Henderson admits it was a fine return to action for his stable star and he is now excited to see him in action at Prestbury Park.

He told ITV Racing: “He has to improve a lot. He’s had a nice time. The timing was good, he hasn’t had a hard race, he hasn’t even had his ground and he’s beaten a good horse.

“He has so many gears. He just has class, it is just pure class and he is very good.

“If he was going to get beaten, today was the day. He will get beaten one day but he was more vulnerable today.

Good horses are going to turn up at Cheltenham and take him on, but hopefully we can go there happy if all goes well between now and then.”