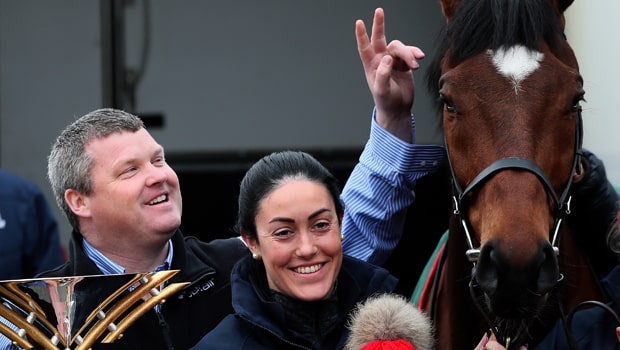 Tiger Roll cemented his name in the record books on Saturday as became the first horse since Red Rum to win back-to-back renewals of the Randox Health Grand National at Aintree.

Red Rum became a cult hero 45 years ago when he won back-to-back Nationals before then adding a third in 1977. Gordon Elliott’s Tiger Roll had defied the odds last year to win before then winning at the Cheltenham Festival in March.

He was the antepost favourite for the 2019 National and he delivered a perfect performance to send punters wild on Merseyside.

Jockey Davy Russell had Tiger Roll well positioned throughout the contest and the nine-year-old kicked away to finish ahead of Magic of Light, Rathvinden and Walk In The Mill.

Elliott says the Cheltenham Festival next year is still the main plan and Russell admits it was a special occasion for himself and the team.

Russell said: “He got very wound up before the race, which was unlike him. Then Denis O’Regan came towards me on another horse of Gordon’s and that was a big help. Once we got going, we were fine.

“This horse and this place is amazing. People go on about certain sporting events, but Liverpool and Aintree are so far ahead.

“People come here in the droves to cheer you on and they can be so proud of what they have here, it’s so well run.

“It’s televised all around the world and I’m so proud to be a part of it, I can’t believe it. Tommy Stack (who rode Red Rum in 1977) is a Tipperary man and I’m still in awe of him, because of this race.

“Myself and Gordon go back a long way, my dad is here – he only booked his flight and hotel on Wednesday. It’s a marvellous day.

“He’s a little devil, he doesn’t get high at his fences, but he gets away with it.”