Thistlecrack tipped to bounce back

Posted by chris schweizer on September 1, 2018 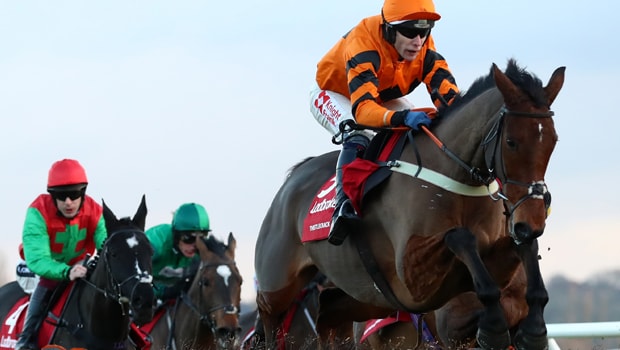 Thistlecrack won the Kempton showpiece on Boxing Day 2016 and was a red-hot favourite for the Cheltenham Gold Cup afterwards, though he wouldn’t make the blue riband.

He went down to Many Clouds in a Cotswolds Chase thriller a month after his Kempton tour de force and then suffered an injury that has result in him running only twice since.

He made his comeback over hurdles last season at Newbury and was beaten, before finishing nearly six lengths adrift of Might Bite in the defence of his King George crown.

Now 10, Tizzard believes Thistlecrack is over his problems and ready for a proper season ahead.

The Charlie Hall Chae at Wetherby has been earmarked for his comeback, while a clash with stablemate Native River in the Betfair Chase at Haydock might follow that.

A million-pound bonus has been offered by Jockey Club Racecourses for the last three seasons if a horse can win the Betfair Chase at Haydock in November, the King George at Kempton on Boxing Day and the Gold Cup at Cheltenham in March.

Tizzard admits that both Native River and Thistlecrack, all being well, could run in the Merseyside Grade One in November.

“Thistlecrack is a little bit older now so things have got to start to happen for him.

We’ll get him out early and get some runs into him, he’ll start in the Charlie Hall first and then we’d have a look at the million-pound bonus,” Tizzard said.

“Although we don’t like them to clash, there are only so many races to run them in and they are both rated highly enough to deserve to run in those races,” he added.

“We couldn’t be happier with them, especially Thistlecrack, he is fully over his little problems last season and we’re now hoping to have a full and successful campaign with him.”

Thistlecrack is 26.00 to regain the King George at Kempton in December while Might Bite is favourite at 3.50 to hold onto the crown.