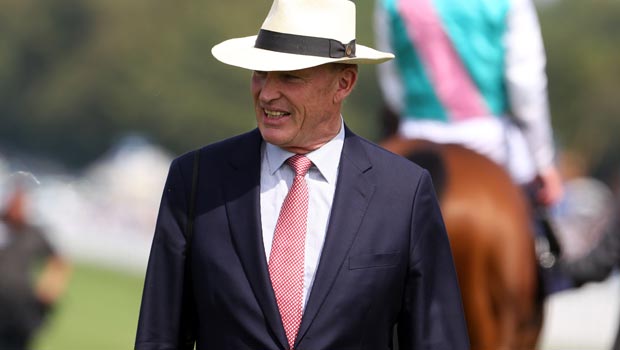 Trainer John Gosden says Taghrooda is still on course to compete in the Prix de l’Arc de Triomphe later this year, despite failing to shine at York recently.

The star filly went to the Knavesmire as the odds-on favourite to win the Darley Yorkshire Oaks having made an unbeaten start to her career.

However, the winner of the Oaks and King George was shocked by Aidan O’Brien’s Tapestry, who claimed victory by half a length.

While Gosden is eager to take nothing away from Tapestry’s win, he believes Taghrooda was not as comfortable as she could have been on the quick ground.

The Lewes trainer is hopeful the defeat at York was a one-off and claims Taghrooda still appears to be in great shape ahead of the Prix de l’Arc de Triomphe on October 4.

He told At The Races: “I’ll be quite honest, our filly didn’t quite let herself go on the ground but I was not going to stand making excuses afterwards. I don’t believe in that, I don’t like anyone who whinges, but the ground was quick underneath and she was just holding back on it.

“It was the same for everyone and that’s why you don’t whinge, you just get on with it. She’s in great order and we’re pointing towards the Arc.

“I take nothing from the filly that won – she’s very talented, beautifully bred and people forget she was favourite for the Guineas. She got lost early in the year and I think they changed the programme, put some condition on her and she came there with a lot of confidence behind her.

“I think they are two exceptional fillies and she liked fast ground more than we did. It was that ground where the grass was short with a little give on top and boom, very firm underneath. It wasn’t her favourite but you go there to race, not to moan about the ground.”

This year’s Arc looks set to be another high-quality affair, with Sea The Moon, Australia and Treve all expected to make the trip to France.