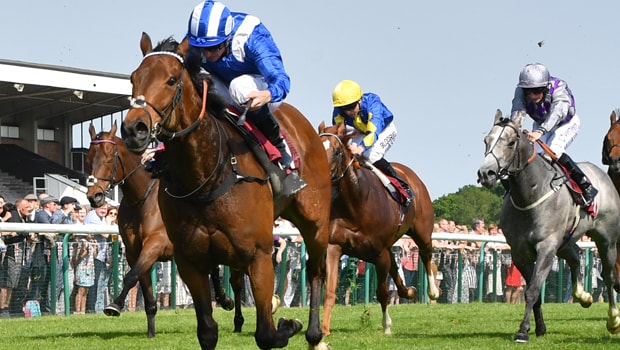 Battaash and Blue Point are set to re-engage in battle in the Coolmore Nunthorpe Stakes at York on Friday afternoon.

Charlie Appleby’s Blue Point ran down Battaash to win the King’s Stand Stakes at Royal Ascot in June, though Charles Hills’ speedster is expected to turn the tables on the Knavesmire.

Battaash was too keen in the Royal Ascot race. He warmed up for the Nunthorpe with a Group 2 demolition job at Glorious Goodwood last month.

His trainer admits to some concerns over his previous tendency to get worked up pre-race, something that undermined him in the Nunthorpe last summer, but is relaxed and feels the horse is now maturing.

“He’s drawn 14, which is fine, and we’ve been very pleased with him since Goodwood. He was impressive that day and did it really well,” Hills said.

“We were beaten by Blue Point at Royal Ascot – he is in there again – but a flat five furlongs will suit us more and we are really looking forward to running him.

“I think we’ll saddle him in the stables and then take him across the track on the horsebox. He’s had plenty of racing since last year and he’s generally behaved well, to be fair.”

Blue Point was below his best in the July Cup at Newmarket over six-furlongs in his one run since Ascot. His trainer is also content with preparations for the Nunthorpe.

Blue Point and Battaash are drawn close by one-another, a positive says Appleby, though he admits the favourite is going to be hard to topple.

“We’re very happy with our horse going into the race. His preparation has gone well. Obviously we hope the rain stays away as he’s definitely better on quicker ground.

“We’ve all got Battaash to beat over this trip, on this track. It’s a good race, but we’re looking forward to it and hoping for a good run.”

Battaash is 1.67 favourite to win the Nunthorpe, while Blue Point is 4.33 to reign supreme once more in the 15-runner Group 1 contest.