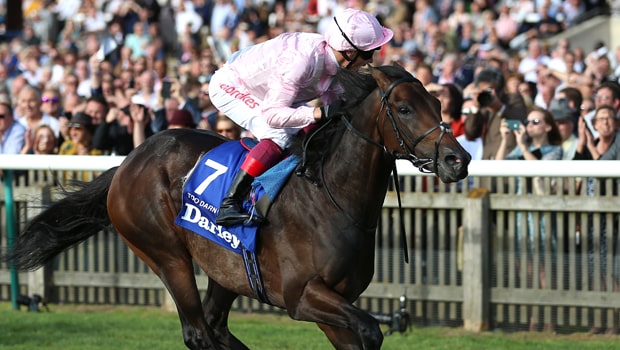 The John Gosden-trained Too Darn Hot could be targeted at Haydock’s Sprint Cup in September after featuring on the entry list.

Last season’s champion two-year-old registered his first success of 2019 last weekend in France, running out an impressive winner of the Prix Jean Prat at Deauville over seven-furlongs.

Too Darn Hot missed the 2,000 Guineas at Newmarket in May then seemingly failed to stay the trip of 1m2f in the Dante at York when finishing second to Telecaster.

The son of Dubawi was then placed in both the Irish Guineas and the St James’s Palace Stakes at Royal Ascot, both races over a mile, before scoring with plenty in hand in France.

He has never raced over six-furlongs in his career to date, but that is now a realistic possibility for Haydock’s showpiece Group 1, given the speed he showed at Deauville.

Simon Marsh, racing manager to owner Lord Lloyd-Webber, said: “He showed an enormous amount of speed on Sunday and we want to keep all the doors open.

“It’s exciting because he was his old self at Deauville and it was great to get him back on track for the season. We reverted to his strengths, running him over seven furlongs, and he recorded an extraordinarily fast time – he’s obviously very quick.

“We got it wrong earlier in the year thinking we could stretch him to a mile and a quarter. The fact he has run consistently well at the top level despite that is testament to him.”

The Tin Man, who narrowly defeated Brando last year, could bid to become the first dual winner of the Sprint Cup since Be Friendly in 1967, while Aidan O’Brien’s quest for glory in the Haydock contest could be spearheaded by Ten Sovereigns.