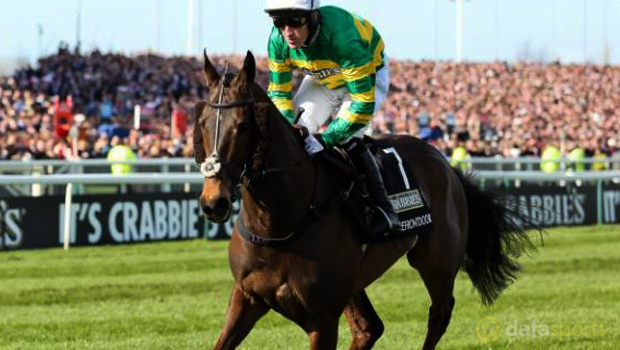 Sir Anthony McCoy feels there are reasons to believe Shutthefrontdoor could improve on last year’s fifth in the Grand National at Aintree.

The legendary jockey rode Shutthefrontdoor in his final Grand National 12 months ago and he admits that he truly believed for much of the race that he was going to win.

McCoy had signalled his intention to retire at the end of last season but confirmed leading into the Grand National that he would retire on the spot if Shutthefrontdoor provided him with a second career success in the great race.

The Jonjo O’Neill-trained runner faded after the third last obstacle, eventually finishing fifth behind Many Clouds.

While McCoy admits that run has raised legitimate concerns over Shutthefrontdoor’s ability to see out the four-mile plus journey around Aintree, he feels there are reasons to believe that the nine-year-old will be better equipped for the test this time around.

“I thought for a long way round last year that I was going to win on Shutthefrontdoor and it was only after the third-last that I didn’t think he would win.

“I don’t know if Shutthefrontdoor really stays and you would be a little bit worried about that,” said the now retired McCoy.

“If he was a horse that had a lot of runs and had no reason to get better then you might look elsewhere, but there are legitimate reasons that he could be better this year.

“He might not be as fresh this year having been to the races at Huntingdon for a gallop the other day so that is a very legitimate reason for him to perform better.”

McCoy says he has no inkling as to which of the JP McManus-owned contenders his successor Barry Geraghty will chose to ride.

Geraghty is now retained rider for the Irishman and while McCoy revealed his personal preference would be for Carlingford Lough were he still riding, he feels Geraghty should listen carefully to anything O’Neill tells him.

“I would have slight preference for [Carlingford Lough],” McCoy admitted.

“If Jonjo said to ride Shutthefrontdoor, though, I would definitely ride him as if tells you what staying chaser to ride he is normally right.”

Shutthefrontdoor is 26.00 to win the Grand National on April 9 while Carlingford Lough can be backed at 26.00.