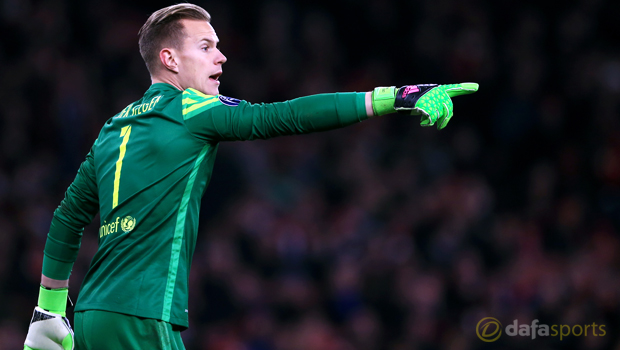 Barcelona goalkeeper Marc-Andre ter Stegen admits that he may have to leave Barcelona in search of more regular first-team football.

The Germany international joined the Blaugrana from Borussia Monchengladbach in the summer of 2014, but he has been very much seen as the cup goalkeeper during his time in Catalonia, making only four league appearances to date, as Claudio Bravo has usually been preferred for La Liga action.

The 23-year-old has featured regularly in both the Champions League and Copa del Rey during his time with the European champions, but he admits that he is unsure exactly where he stands under coach Luis Enrique.

He said: “I don’t know what the coach [Luis Enrique] thinks, you have to ask him. I can just say that I want to give my very best.”

Ter Stegen, who has been linked with Liverpool, insists he is happy to rotate the goalkeeping duties with Bravo for now, but he concedes that he may have to move elsewhere if his long-term prospects do not improve.

He added: “Obviously I also have personal goals. The coach decides the way he decides, I guess he has his reasons to do so. But we will see how this goes on in the future.”

The Blaugrana are still going strong in all three competitions this season as well, but they will face a stern test when they play host to fierce rivals Real Madrid in La Liga on Saturday in the second El Clasico of the campaign.

Barca are available at 1.57 to secure victory in the match, while Los Blancos are on offer at 5.00 and the draw is priced at 4.75.