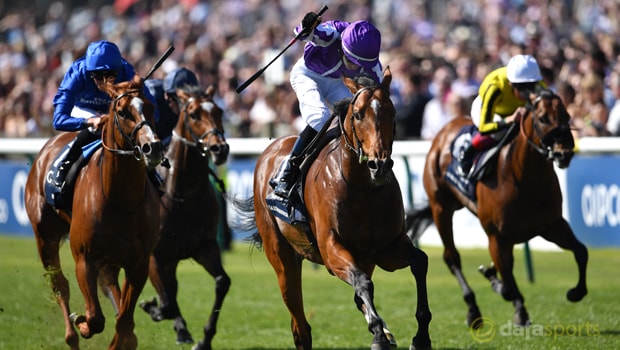 Connections of Saxon Warrior admit they will head straight for The Derby in June after his first Classic success.

The three-year-old continued his winning run on Saturday as he won the Qipco 2000 Guineas at Newmarket.

The bay colt has won all four races in his career to date and he proved too much for the likes of Masar and Gustav Klimt.

Jockey Donnacha O’Brien was delighted to get the job done and Paul Smith, son of co-owner Derrick, is adamant The Derby is their aim.

He told ITV Racing: “It was really eyecatching, Donnacha couldn’t speak too highly of him.

He said when he quickened it was all over in a flash. “He probably got there sooner than he wanted to, but he had so much horse under him.

It’s very exciting when they have that speed and look like they’ll get further. All things point to June (Derby) now.

“That’s 300 Group Ones wins for Aidan and Donnacha’s first Classic. They are an incredible family.”

Saxon Warrior is 2.25 to win The Derby next month and he is set to renew rivalries with Masar, who is priced at 15.00.

Confirming his plans for Masar, Appleby told reporters: “He lost nothing in defeat there. He has progressed with every run.

William (Buick) was very happy that he got into a nice rhythm there. He said he just felt when they quickened up he just lacked that turn of foot.

“He is a horse with a Derby pedigree and that’s where we will head now, all being well.”