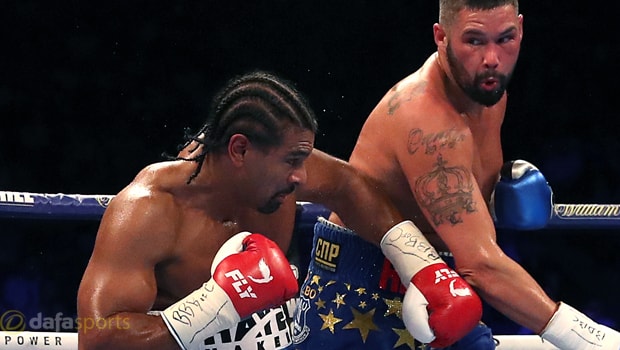 Liverpool’s Tony Bellew has admitted he could retire from boxing after beating David Haye for a second time.

The former WBC cruiserweight went into the rematch as the underdog but he silenced his doubters with a superb performance on Saturday night at the 02 Arena in London.

Bellew won the first fight via TKO after Haye ruptured his Achilles but the second fight was much more convincing. He knocked Haye down three times before the referee waved the bout off and Haye admits that retirement is a possibility.

“It will take something absolutely ridiculous to make me do it again,” Bellew told Sky Sports News.

“Something huge. It would have to be massive because I’m happy with what I’ve done. I’ve proven everyone wrong.

“I’ve been the biggest dreamer for my whole life – I said I’d fight at Goodison Park, I said I’d be amateur champion after two fights. But it’s another thing to really believe it. I stuck by my dream and it’s got me to here.

“I like the Tyson Fury fight. I do think I can knock Fury out.

“I just know I can beat Andre Ward. People will laugh at me and say ‘no chance’. But the monster, David Haye, with the big muscles was supposed to knock me out and it didn’t work out.

The fat kid looked the stronger man. I bullied him. I physically manhandled him.”

A fight at cruiserweight could tempt him back, with Oleksandr Usyk set to take on Murat Gassiev later this year. Usyk is the 1.36 favourite, with the draw 21.00, while Gassiev is priced at 3.30 to win.