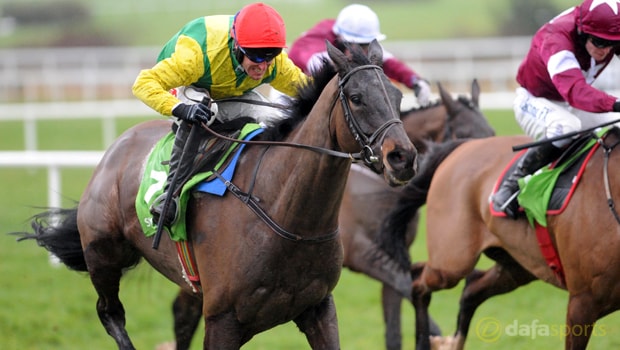 Robbie Power doesn’t feel stamina will be a problem for his Cheltenham Gold Cup mount Sizing John, while he highlights dual runner-up Djakadam as a big danger.

Power will ride the Jessica Harrington-trained Sizing John in the festival highlight on March 17, with the seven-year-old set to venture into previously uncharted waters in terms of stamina.

Previously trained by Henry De Bromhead, Sizing John was a top two-miler but, having been switched by owners Alan and Ann Potts to Harrington’s team this season a step up in trip followed.

Sizing John often played second fiddle to the mighty Douvan over two-miles, however, after winning the Kinloch Brae Chase at Thurles over two-and-a-half-miles, he landed the Irish Gold Cup last month.

The manner of his success in that Leopardstown three-miler has convinced jockey Power that another two-furlongs at Cheltenham will be within his compass.

“Sizing John has always given the impression that he stays very well. He galloped all the way to the line in the Irish Gold Cup.” said Power.

“I suppose you don’t know until you try, but I’d be confident he will get the extra two furlongs and obviously a bit better ground would help.

“He’s run well twice at Cheltenham before over two miles and his big strength is his jumping.

He’s very quick through the air and he gets that from having run over two miles in top-class races.”

Sizing John has won four and placed in three more of his nine career runs over fences.

Ahead of the Gold Cup, Power highlights Willie Mullins’ Djakadam, runner-up in the last two years, as a key danger to his own hopes.

“On a line through Don Poli, he’s probably got the best chance of the Irish runners, but the one Irish horse I’d be afraid of is Djakadam as he’s going there fresh and it’s the first time he’s done that.

“It’s a competitive Gold Cup and there’ll be a big field so you’ll need a lot of luck,” he added.