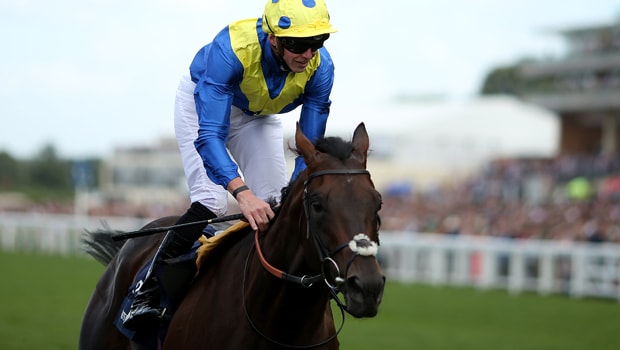 Sir Michael Stoute landed a record-breaking sixth win in the King George VI And Queen Elizabeth Stakes at Ascot as Poet’s Word got up late on to deny stablemate Crystal Ocean.

The Stoute-trained pair had been jostling for favouritism all week and they hardened still further when John Gosden’s Cracksman was pulled from the race on account of the firm ground.

Rostropovich and Salouen set a strong pace from the outset but they were wilting as the field turned for home.

Crystal Ocean, winner of the Hardwicke Stakes last month over course and distance took his chance and established a healthy lead under William Buick, while James Doyle had to angle Poet’s Word widest of all to get by the filly Coronet.

Winner of the Prince of Wales’s Stakes over ten-furlongs at Royal Ascot, Poet’s Word had proven stamina and a turn of foot to match and he needed both to get on terms and edge by his stablemate with the winning line in sight.

The pair were some nine-lengths clear by the line and the trainer admits it was tough to have to watch one of them lose.

“Two wonderful brave athletes. The first reaction is you feel sorry for the one that got beaten. It’s taken a long time (to get the record sixth victory),” he said.

“It was a pity there was a loser. That’s how you sum it up. James Doyle could have done a little bit better and got a dead-heat!”

He was delighted however to have won the King George a record-breaking sixth time, a fine reward for his team.

“It’s a great mid-season race and we’ve been luckily enough to do well in it. It’s a great team effort, you have no idea how much they put into these horses,” Stoute added.