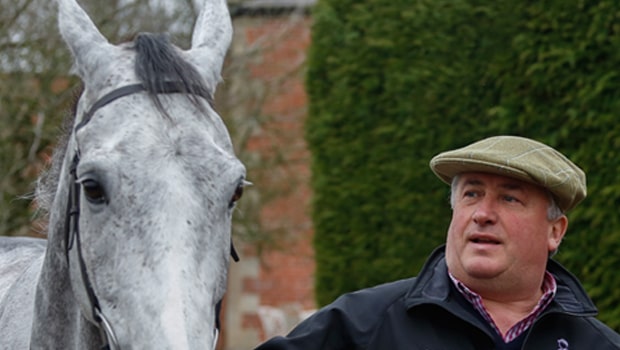 Paul Nicholls is hoping a new tactical approach can ensure Politologue retains his crown in the JLT Melling Chase at Aintree (15:25) on Friday afternoon.

The grey repelled the challenge of Min to win the race last season and will once more be squaring off against Willie Mullins’ runner, while the presence of the Ruth Jefferson-trained Waiting Patiently ensures a stellar renewal is in prospect.

Politologue comes into the race on the back of what his trainer believes was a “career-best” effort last month in finishing second to unbeaten superstar Altior in the Queen Mother Champion Chase at the Cheltenham Festival.

Harry Cobden was under instruction to be patient in that race, something Nicholls felt worked very well.

“We rode him very positively in the Champion Chase last season, and he was in front from the back of third-last into the straight, so this time we stalked and stalked and had one go at Altior – and it worked very well,” he said.

“We probably learnt that day we don’t need to ride him so aggressively. He ran incredibly well in the Queen Mother – I would say it was a career-best,” added Nicholls.

“Two-and-a-half miles on a flat track suits him well, so we are looking forward to seeing if he can win the race for the second year running.”

Politologue is 3.50 to win the Melling Chase, with Waiting Patiently favourite at 2.88 and Min trading at 4.00.

Having adopted hold-up tactics with Min last month at Cheltenham to poor effect, Mullins suggests Ruby Walsh’s mount will stride on this time.

“I think the change of tactics backfired in Cheltenham, which happens,” he said. “He’s in good form, and I’d imagine we’ll change back to the usual tactics [now].”