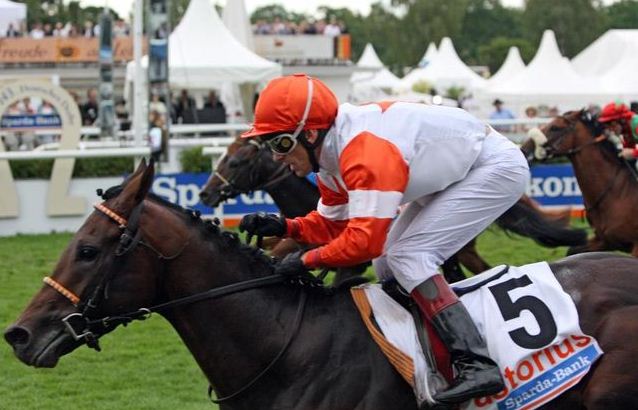 German star Pastorius will be partnered by Olivier Peslier in Saturday’s big race, the Coral-Eclipse, at Sandown.

Although Al Kazeem will be pretty tough to beat in the Sandown feature this weekend, one animal that will not be overawed is the German colt Pastorius who has some big victories to his name already.

The four-year-old has won three Group 1 contests, including the Prix Ganay at Longchamp on his penultimate outing, but was down the field last time out in the Singapore Airlines International Cup at Kranji.

Apart from that effort, he has been ultra-consistent, and is expected to make a bold bid on just his second appearance in the UK, having finished a creditable fourth to the now-retired Frankel in last season’s Champion Stakes at Ascot.

The son of Soldier Hollow has been given a break since returning from Singapore and has reportedly worked well ahead of his trip to Sandown.

Trainer Mario Hofer said: “He worked on Monday, everything is fine and he is in good condition.

“Things did not go right for him in Singapore. The weather was very hot, it was not easy and it was not a good race for him.

“He came back home, we have given him a break and he seems very well. Hopefully he will go to Sandown and give his best performance.

“Olivier Peslier is going to ride him again. They won the Ganay together and Olivier is a top international jockey.

“The ground is not a problem for our horse. He won the Prix Ganay on fast ground and won a Group 1 in Munich last year on soft ground, so there is no problem there.”